Home / Leadership / The Most Critical Mistake a Team Leader Can Make 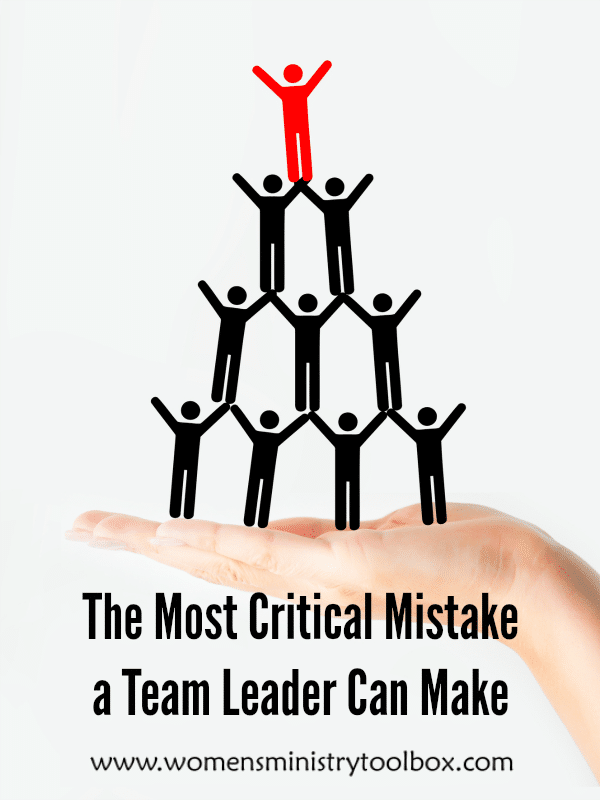 Some team leaders were strong, others struggled.

You’ve probably had similar experiences yourself.

There is one critical mistake team leaders can make that will render their team ineffective.

Team leaders who fail to define roles and responsibilities hinder the success of their team.

When multiple people are issuing directions or information about an event confusion occurs quickly.

2. The ball being dropped multiple times.

If one person is now in charge of everything (from décor, to publicity, to registration, to the budget) details are missed and as time runs out not everything is completed.

Instead of being a team event, it is now “Susie’s event”. The success or lack of success of an event rests solely on one person’s shoulders. There’s a lack of team effort. Team members do it all rather than ask for help.

Those who are gifted are sitting on the sidelines instead of serving because their help hasn’t been requested. There’s a lack of appreciation for the talents of the team members.

There’s little communication. The rest of the team often doesn’t know what to expect at an event.

6.Failure to involve other members of the body.

We fail to reach outside of the team for volunteers because we’re not even using the ones within the team.

No set of skills are being taught to new team members. There’s no transfer of knowledge.

8. There’s a lack of process and procedures and with it a lack of continuity and consistency.

For example, every piece of publicity looks different and is distributed in a different manner. Everyone does things “their” way without regard to others.

9. Delegation is preached, but rarely used.

“Ask for help if you need it” is the mantra. That sets up the team member as looking weak if they can’t do it all.

10. Team members getting burned out after events.

When one person does it all and shoulders all the responsibility they finish exhausted and worn out. Sometimes a bitterness arises over the lack of help.

11. Team members who don’t step up when help is requested because “it’s not their job”.

They don’t have to help so they don’t. Delegation doesn’t work.

When there are no roles or responsibilities in place teams struggle. Greatly.

And struggle we should, as we are going against God’s plan!

God makes it clear in Romans 12:3-8 that we are given different gifts. In 1 Corinthians 12 we are reminded that with our various spiritual gifts we must function as different parts of the body.

Defining roles and responsibilities enables our team members to serve and serve well.

May our teams reflect Ephesians 4:6, “From whom the whole body, joined and held together by every joint with which it is equipped, when each part is working properly, makes the body grow so that it builds itself up in love.”