Home / Event Planning / Conferences & Retreats / Day 4 – When should you have your women’s ministry retreat? 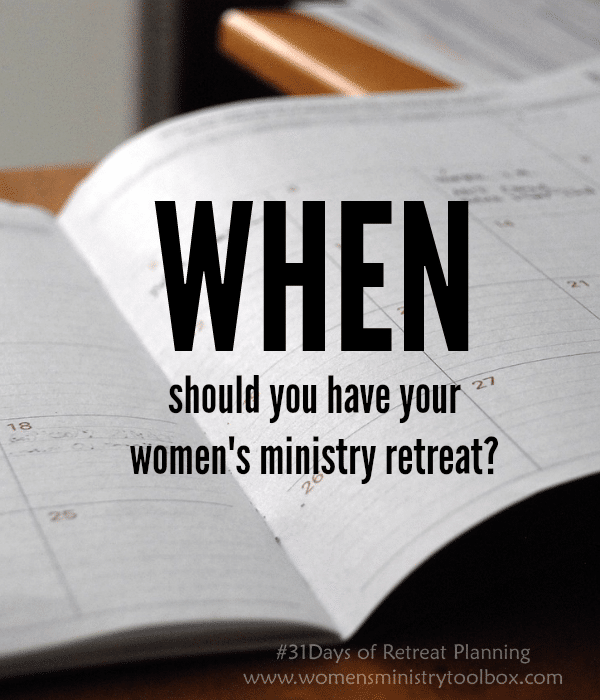 So we’ve worked through “where” you might want to have your women’s ministry retreat.

Today, we’re going to dig into the “when”.

First the bad news, there is no perfect date on the calendar.

It will always be someone’s birthday or anniversary. There’s a chance of a sports playoff game and overlapping vacations. It may be too hot for some, and too cold for others.

You may be tempted to throw a dart at a calendar, but we can do better than that.

One of the best ways to figure out a good weekend for your retreat is to figure out which dates are not good dates according to your church’s calendar.

God controls the weather, but your team may be uncomfortable asking women to drive into the mountains in January or February. Likewise, your team may want to avoid the height of hurricane season at the beach. 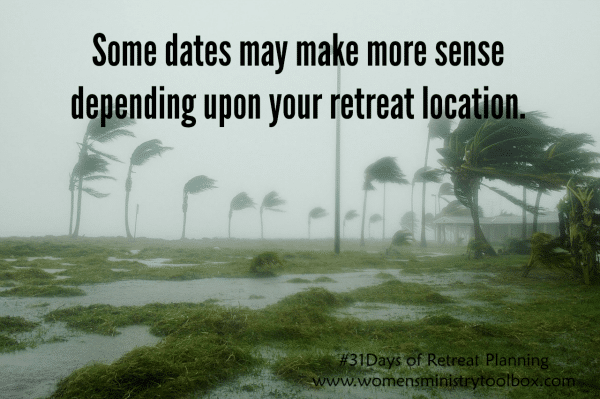 Some dates may make more sense depending upon your retreat location.

Many women’s ministry groups find it’s best to plan their retreat for the fall.

Generally speaking that leaves you with September, October (avoid Halloween), early November, late January, February, early March, and maybe part of April (depending on where Easter and Spring breaks fall).

Seriously consider, too, when you’ll be doing the bulk of your retreat planning and preparations.

It can be hard, but not impossible, to do retreat planning over the summer and during November and December.

How long should you be gone?

We’ll talk in more detail about your retreat schedule soon.

For now, think about if you’re going to plan a one or two night retreat.

Get feedback from your Pastor. Find out what’s worked in the past or if there have been issues.

Don’t forget to put it on the church calendar! You don’t want any other group planning something for the same date!

Previous Post: « Day 3 – Where should you go for your women’s ministry retreat?
Next Post: Day 5 – How to Pick a Retreat Theme »