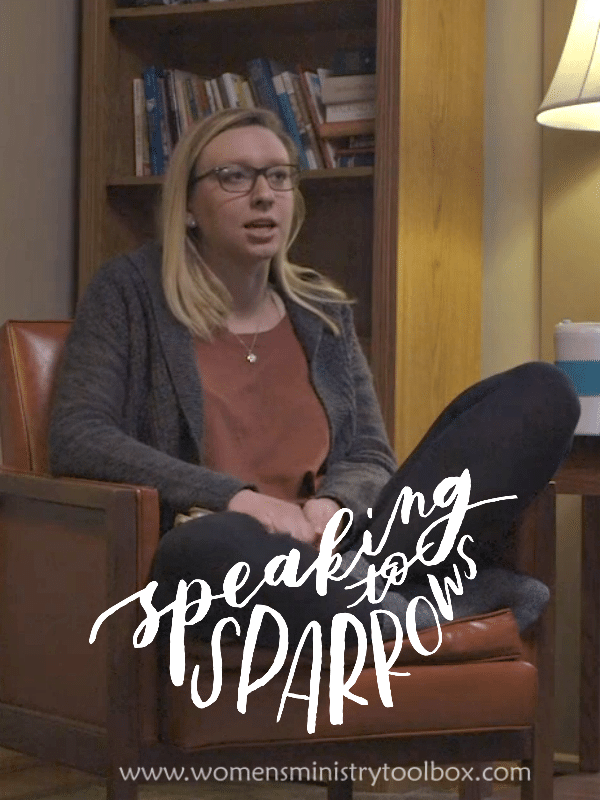 “I was never comfortable in my own skin.”

“My life will be ruined if I’m ever open and honest about this.”

“There are parts of me I gave away that I wish I had not.”

Women who feel forgotten by God.

Women who need the love and the hope that only comes from having a relationship with their heavenly Father.

How do we communicate love and hope through the hurt and brokenness from which so many of our women suffer?

I recently came across a documentary that shines a light on the darkest places in a woman’s heart.

A powerful, new documentary from Project Light Ministries, Speaking to Sparrows is about women finding courage to confront the uncomfortable.

The film brings to light the issues facing women in today’s world and creates space for the difficult conversations. It is these conversations that are a light in the darkness, and can lead to sisterhood, belonging and healing.

When a dear friend posted this trailer for Speaking to Sparrows, I knew I had to find out more.

Speaking to Sparrows // Trailer from 4PM Media on Vimeo.

4PM Media beautifully and powerfully shares the true, often heart-wrenching, stories of over a dozen women and one dad.

In bits and pieces their stories and struggles are laid bare on the screen.

Among those young women is Kayla. Kayla bravely admits, “I would look in the mirror and think I was fat, even though I was pretty normal.” Her struggles with body image are ones most young women, and even older women, can relate to.

Julie gives viewers a glimpse of the pain and confusion of being abandoned by her father. “It broke my heart that my Dad didn’t want to live with us.”

Ferrin admits, “It’s been so difficult for me trying to look at myself and see myself as beautiful just because that was something I was, you know, never told. Because I was never told that when I was younger, I didn’t believe it.”

Scattered amongst the voices of young women in the documentary, are three women who offer hope in overcoming hurt, rejection, and doubt.

Mary Bielski, a popular speaker to teens and young adults, adds a voice of seasoned wisdom and bold honesty. “We have an identity crisis. We don’t know who we are. We don’t know Whose we are.”

Audrey Assad, a musician, speaker, and author, boldly shares about her innocent discovery of and addition to pornography when she was 15 years old. Fearing she “was severely damaged and … [my] life will be ruined if I’m ever open and honest about this” she didn’t speak to anyone about her struggles for years only to find others in her circle struggled with this too.

Sister (Sr.) Miriam James will wreck your preconceived notions about nuns – in a good way. Sr. Miriam’s joy is contagious! She gives hope to those struggling with choices they made in the past, as one who “was going to do whatever it took to be liked.” Sr. Miriam knows where to find Truth, “As I gaze on the face of Christ, I’m learning who I am in Him.”

(Side note: Great care was taken by the team to create a film that reaches all Christian denominations. I personally did not find anything of concern.)

Is God calling your team to use Speaking to Sparrows to open the door for conversations that can begin the process of healing? With His help, we can lead women to the foot of the cross where forgiveness, hope, love, and relationship in Christ can be found.

What you need to know:

1. To show Speaking to Sparrows at your church, you’ll need to purchase a screening package. There are three options, including a retreat, and you can read about them here.

2. Screening packages include a Discussion Guide. Use those questions in your post-film discussion. Or use the documentary as a launch for monthly small group sessions to unpack the topics covered. Or start a mentoring ministry.

3. Speaking to Sparrows will trigger some powerful emotions and memories. Please, please don’t just show this movie and then send your women home. Include time to begin discussing some of the struggles the young women dealt with in the film. Bring in a qualified female Christian counselor. Prep your Prayer Warriors and have them available to pray over and with any women in need of prayer.

4, There will be tears. There will be discomfort. It is real and it is very raw at times. Carefully consider the room in which you’ll host your showing. Liz and Janine suggest making your room as cozy as possible – comfortable chairs, low lighting, warm and welcoming.

5. Preview the movie before finalizing your plans. You need to be fully aware and prepared for the content. One Youth Pastor delayed his event after previewing the movie, so he could better prepare for their event.

Speaking to Sparrows, isn’t just a teen or women’s ministry event. The documentary has been shown to teen guys and Dads.

As a mama of teen boys (18 and 15), I don’t think they can even begin to grasp how girls think about themselves and the pressure they might put on a girl to do or be a certain thing.

Ben, a dad featured in the documentary, sees the impact his role of earthly father can have on his daughters. Dads who have seen the movie in previews are choosing to be more intentional in their relationships with their daughters. Many have had their eyes opened to the impact their words, or lack of, have on their daughters.

Prayerfully seek how and with whom you’ll share this film.

As the film wraps, don’t miss this beautiful song, “Hole in My Heart” written and performed by Tom Young that plays as the credits roll.

You can find out more about Speaking to Sparrows on the website here.

Click here to find out more about Project Light Ministries and to donate toward future film projects.

May each woman who sees this film fully grasp how deep and how wide God’s love is for her.

You may also want to read:
How to Tackle Taboo Topics
How to Engage Multiple Generations
Mentoring Ministry Resources